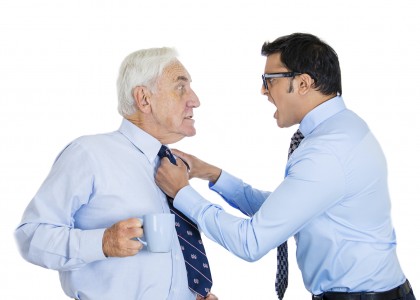 I wish I was the first person who ever uttered this unbelievably accurate view of the world.

I guess I almost could have been the first, since the quote is most often attributed to political consultant Lee Atwater (who is only twelve years older than me). I find that odd, of course, since the saying seems so much older and wiser. I liken it to Ben Franklin’s “early to bed and early to rise yada, yada, yada” era.

The meaning of this quote, for those of you who are a little behind here, is that what people perceive is, in fact, their own reality. For your workplace, this means your perception is your reality, your boss’s perception is her reality and your coworkers’ perceptions are their (respective) realities. It does not matter one iota what the truth is, only what the perceptions of the truth are. More often than not, perception and reality are the same. It’s never really a problem when these two are aligned. The real (and perceived) issues crop up when they are not in alignment/agreement.

In order to make every effort and activity count, you need to control others’ perceptions of you. It makes no sense to devour an enormous shit sandwich if no one knows you ate it. In other words, if you’re perceived as a do-nothing or unreliable, then privately consuming your weight in shit sandwiches for the sake of the company will gain you nothing but a full stomach, brown teeth, and really awful breath.

Okay, but what if I’m right and everyone else is wrong?

Let’s assume for a moment that the reality matches your perception 100% (which is almost never the case, even for realists like me). What are you supposed to do when someone important to your growth or the company’s growth has a misguided perception? How about when the reality is that you work with a complete jerk and his perception is that you are the jerk and he is a saint?

I once worked with a real tool who felt threatened by me at every turn. Let’s call him Richard. We were peers – Richard was the head of one department and I was the head of another – and he literally worked almost daily to sabotage my efforts (or, at the very least, make himself look better to our bosses). Because I was ambitious and wanted (and deserved) a promotion that he also sought, I couldn’t just sit by and let him screw me over. (Forgetting my own ambitions for the moment, his efforts were also destructive to the overall well-being of the company.) However, because there are no winners of the “my unit is bigger than your unit” contest, I was not about to sink to Richard’s (Dick’s) level.

This is the reason that chronically depressed people outwardly show their depression to everyone they encounter. They feel like crap subconsciously, so they wear it on their conscious sleeve – even though they know this display of depression is probably not the best thing for their career or relationships.


Perhaps an easier example of cognitive dissonance to comprehend is the mentality of the cigarette smoker in 2015. There is clear and convincing evidence that smoking leads to premature disease and death, yet millions of Americans continue to smoke. Are they unaware of this evidence? Or, do they just choose to accept their fate?

The answer to both questions is most often no. Cigarette smokers are both aware of the evidence and yet most do not accept the inevitabilities of smoking. They do not believe that smoking will give them lung cancer and so they can continue to smoke without second guessing every puff. (If they allowed themselves to believe that smoking would be personally fatal – and they continued to smoke – they would be in dissonance.)

There is also a confirmation bias that affects cigarette smokers, of course. They see the examples of some lifelong smoker who lives to 95 and a 40-year-old nonsmoker who dies of lung cancer as a sign that smoking is not dangerous. This helps feed their conscious self to keep smoking when their subconscious self is screaming for a puff.

(Quick note: I’m not a psychiatrist or medical doctor, so save your comments/emails on how I missed this or that when it comes to explaining anything so far in this post. I don’t care what I left out, because it doesn’t help me make my point or help the reader become perceived as a better leader. So, MYOB, please.)

Back to Richard the Jerk and The New Steve…

There was no way to win with Richard. His perception was all that ever mattered to him and everyone he ever met. He was as egomaniacal as anyone I’ve known; and trying to prove I could be a bigger jerk would just make things worse for me in the short and long run. Also, exposing Richard for what he truly was would not work. Our bosses were charmed by Richard at every turn and he’d come to our company with the highest of recommendations.

I could not win by playing offense or defense against Richard, so I chose not to play. Instead, I created “The New Steve.”

In a nutshell, The New Steve went out of his way to be insanely nice to Richard; regardless of how or if Richard reciprocated. Where Richard would struggle to grunt out a monotone “morning;” The New Steve would respond with a sincere-sounding and hearty “Good Morning, Richard. Great to see you!” Throughout the day, every passing encounter with Richard would generate a huge smile from The New Steve with either a wink or (more likely) a wink, a pointed index finger, a nod and a “Hey, hey; Richard!”

Initially, Richard figured something must be up; and he remained on guard against any kind of friendly interaction. I, on the other hand, began to actually enjoy seeing Richard because every time I did, I smiled and acted happy to be around him. You see, my subconscious dislike for Richard was supplanted by my conscious (though initially fake) excitement to be in his company. I felt better about Richard; and, subsequently, about my job. I had less stress and ended up looking forward to Monday mornings. Eventually – and to this day – I liked and respected Richard. In my effort to win him over to my side, I no longer hated the sight of him.

This should be enough of a benefit, but I was not the only one who changed. Richard began supporting me to our bosses both in person and behind my back. He became my true coworker and the company grew because of it. In the end, Richard got a great gig with one of our suppliers and I got the job we both wanted within our company. Had I not tried The New Steve, my guess is one of us would have quit or been fired, and neither of us would be as successful as we both are today.

The perceptions that The New Steve created became the reality for our relationship and the company as a whole; and everyone benefited.

Perception is Style; Reality is Substance…

I remember years ago I was discussing the phenomenon that style in the workplace mattered more than substance with a colleague and she told me about a team interview that she helped conduct at her company. My colleague, her department head and a few other department heads were looking to fill a position that would be equal to my colleague’s. (While this was not a management position, it was also not entry-level.) They had asked her to help interview this person, because she was the one that would have to work side-by-side with the selected candidate; and because the success of the department depended on everyone delivering on the goal.

The team interviewed three people: A young man, a middle-aged woman (roughly the same age as my colleague), and a slightly older woman. (It’s important to note that the position was one in a female-dominated field.) All three possessed whatever prerequisites the position mandated, including a college degree. The young man had no experience (other than his college training and an internship in the industry); while the two women had extensive backgrounds not only in the field, but also the specific discipline the position covered.

During the young man’s interview, he was animated, excited and energetic; and seemed open to learning, sharing and working hard to achieve the goals of the position and the company. All of the interviewers were impressed by him and his delivery; this despite the fact that my colleague indicated he really was the least qualified of the three.


The female candidates, conversely, were fairly quiet during their interviews. Answering all questions accurately and indicating they were eager to get started working, but without any excitement or energy. All of the interviewers were unimpressed; this despite the fact these women possessed extensive resumes and good track records.

They hired the guy.

Before you assume that there was some anti-female bias at work here, realize that all of the interviewers were women; and that (as I said) this was a female-dominated field. They all saw themselves working and interacting better with the young man than with the older women – even though they all clearly had more in common with the women.

What do the two unsuccessful candidates have in common? One word: boring. Their inability to generate excitement in others creates the perception that they are inferior to the exciting alternative. The reality is irrelevant. In many ways, the women were hurt by their own humility.

Act successful. Humility is important; but you can do both.

As Patrick Swayze’s Dalton said in 1989’s Road House, “be nice.” Whether you’re a world famous bouncer cleaning up the Double Deuce or someone trying to move up the ladder at work, the “be nice” mantra is one worth following.

Being nice is, in and of itself, a form of perceived humility; but for truly successful people, it is also a way of life.

Whenever you read about, hear about or meet truly successful people – from businessmen to presidents – you learn that they really seem to care about others. They’re nice. Perhaps they’re only nice on the outside and ruthless pricks on the inside. Who knows? It’s irrelevant. What is relevant is that their outside persona – or how they are perceived by others – is that of someone who genuinely cares.

When you meet these people face-to-face, it’s as if everyone else has dropped away and you are the most important person in the world to them. Their ten seconds of niceness can translate into a lifetime of admiration from everyone touched by them. What is it they know that the average prick boss or jerk coworker does not? It’s that it doesn’t cost them anything to be nice; but it could cost them everything to be an a-hole. Regardless of how they feel about the little people they meet; they understand that the perception of being a nice guy is more important than any reality.

Perhaps Frank Burns from the television version of M*A*S*H said it best when he explained that “It’s nice to be nice… to the nice.”

« What I Sincerely Hope My Local Car Dealer Can Learn From Tire-Rama » Yippee! We’re Above Average!