Pull Yourself Up by Your Bootstraps 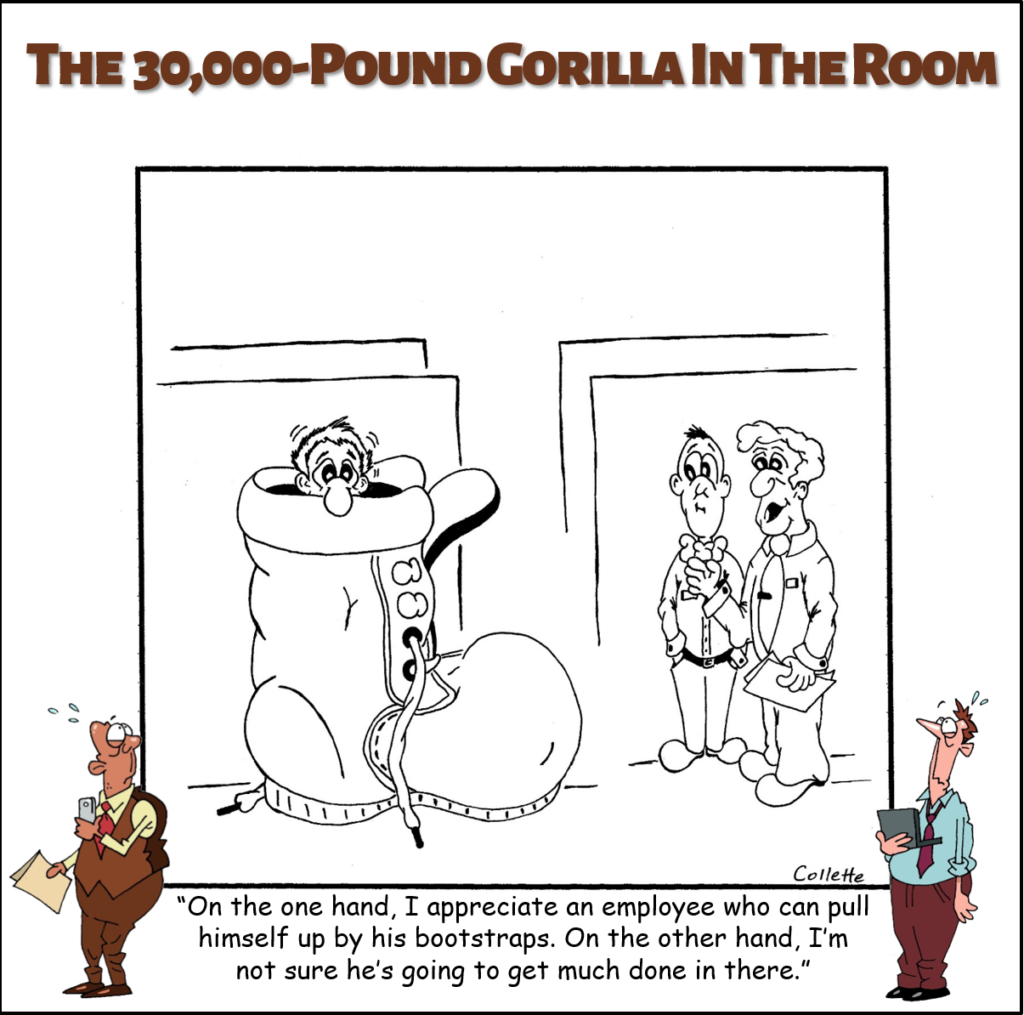 (Pull Yourself Up by Your Bootstraps is an annoying business term and is just one of the 212 Most Annoying Business Phrases Managers Effuse, Confuse, and Overuse detailed in the hilarious must-have guide for every workplace: The 30,000-Pound Gorilla in the Room. Available right now on Amazon.)

Pull Yourself Up by Your Bootstraps

If you hear this one, do the speaker a favor and check his pulse. Chances are he’s very near death – or, at least well beyond the mandatory retirement age at most companies.

Pull yourself up by your bootstraps was a last-minute addition and would not have been included if Steve hadn’t personally heard it uttered by a senior (in more ways that one) manager of an automotive dealer group while we were finishing this book.

When the manager said it, Steve did a true doubletake. “Did I just hear what I think I heard? Quick, someone get me a calendar, I need to verify we’re in the twenty-first century!”

After the phrase sunk in, Steve realized this guy had probably been using it for nearly five decades. Of course, now that this manager was dealing with Gen Z and Millennial workers, he likely felt the need to dust it off and add it back to his arsenal of annoying terminology.

Lucky us. (Well, lucky us, as we now get a chance to overanalyze this irritating phrase.)

When you give this one any thought, it hurts your brain. We know what bootstraps are and we also understand a tad about physics. So… how in the heck did this ever become a saying? Pulling upward on your own bootstraps does nothing once your boots are firmly on your feet. You cannot physically pull yourself up by your bootstraps.

Certainly, if someone else pulled on your bootstraps – provided he or she was strong enough – you could be lifted off the ground.

What part of “Yippee, look at me! I’m seven inches off the ground because these two big guys are pulling on my bootstraps!” says success or accomplishment? We give up.

If there’s any good news, it’s the fact that this is one annoying phrase you probably won’t be hearing much in the future. RIP.

Replacement phrases: No replacement needed… at least not from this century.