The 25 Most Annoying Business Phrases

The 25 Most Annoying Business Phrases Managers Use

From the overused to the clichéd, we are inundated on a daily basis with annoying and ridiculous business phrases from the lips of well-meaning managers.

Why so many of us, present company included, rely on the latest catch phrases or tired business jargon to relay a particular message is unclear. Whether lazy, blocked or we really think it makes us sound important, we too often reach for the prepackaged word grouping instead of constructing an original sentence.

Tired of the constant use and misuse of worthless wordings, we decided to assemble a list of formulaic business phrases still in (over)use today. Of course, simply compiling a list of the worst or most annoying business phrases was too easy – narrowing that list to just twenty-five proved to be the hard part.

To add a little complexity to this project, we decided to author a single speech using all twenty-five of the most annoying business phrases. That speech, which you are encouraged to deliver at your company’s holiday party this year, is located at the bottom of this article.

After countless hours of debate, here is our list of the 25 Most Annoying Business Phrases Managers Use. For those wishing to sound more like true leaders, we included very simple replacement expressions for each. 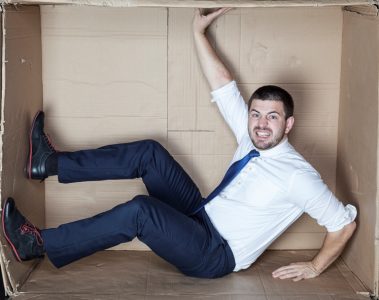 As promised, here is a speech you can deliver at your holiday party this year that will surely make you sound like either the most intelligent or most pompous person in the room. Intelligence is in the ear of the receiver.

I’m reaching out to you today to thank you for helping us make last year a winning period for our business. Despite the economic turmoil we face at this point in time, your dedication to synergy and out of the box thinking has allowed us to make incremental improvement in our rightsizing efforts. FYI, In order for us to take it to the next level, we need everyone to hit the ground running on their ‘09 action items and give 110%. As I take a 30,000-foot view of our industry, I see competitive solutions providers who must light a fire under their teams, tear down their silos and make significant paradigm shifts if they expect to catch us, the 800-Pound Gorilla. To these companies I say, “let me give you a heads up, you’d better bring your ‘A’ game if you want to beat us.” We are the industry’s best because we are superior in every way. We are better at blocking and tackling, we are better at gathering the low hanging fruit and we are better at exceeding expectations during client engagements. If we have disagreements, we take it offline – we never throw each other under the bus. If you want my two cents, I would rather work with this group than with the finest people on earth.

Now sit back and bask in the applause.