(The following guest post was written by a respected colleague of mine in the automotive industry. The author, who shall remain nameless, is one of the brightest, most energetic, hardest working and truest “team players” I’ve ever met. His/her frustrations are far too common in most industries; but are especially common in automotive. His/her words should be heeded by OEMs who’ve enjoyed moderate success despite their shortcomings. Pricing transparency and other threats to virtually all OEMs’ dealer bodies are starting to crack the facade; where underneath there exists a world mostly void of leadership and common sense. Published here with his/her permission, of course. – TheManager)

Call this my Jerry Maguire Moment

Call this my Jerry Maguire moment.

Like Jerry Maguire, I am questioning my industry’s mission and values.

Unlike Jerry Maguire, I do not plan to create my own noble Mission Statement and seal my demise by distributing it to the very people who just don’t get it. That would be fruitless; as the only thing that would change would be my employment status.

May you never know my name, but may you realize that my feelings are felt by all too many.

My industry, you ask? Automotive. More specifically, I am one of the thousands of manufacturer (OEM) representatives whose job it is to deliver value to our customers: the dealers who sell our products to the public.

Some quick background into the OEM-dealer relationship: Nearly everyone who works for a manufacturer believes the dealers are idiots. And, for the most part, we are right.

Of course, nearly every dealer believes that those of us who work for the manufacturers are idiots. And, for the most part, they are right.

It is from this world of idiots that I wonder the following about my side of the equation:

Why is it that everything on our side is simply a box that is checked; instead of working to do the best for the people that support the brand? Why do OEMs continue to deliver less support, inferior dealer programs, and second-hand advice from self-serving, third-party companies that leech onto the teat of the mother ship’s budget?

It’s actually pretty simple and something that has been working to fool dealers and the OEM leadership for years: Hire generalists that will move to a new position every year, make sure they check the program boxes that are needed in their performance reports (without understanding what they are delivering and why); and finally, if all else fails, just throw money at it by hiring an outside company that claims to have all the answers and swears to be your “partner.” 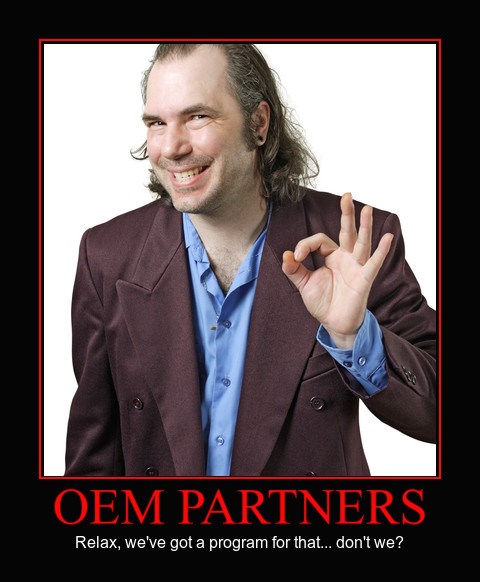 I think it’s important to define partner as it exists in the auto industry. A partner is a company that develops fear inside of the host organization that without the partner’s services the OEM will be missing valuable sales opportunities to other brands; which is insane, because the partner is working directly with those other OEMs as well. The partner then creates a continuous dependency with the OEM by using sophisticated graphs, shiny objects, and specific acronyms that shorten clever buzz words, which glaze over the eyes of everyone in the boardroom and drive the OEM leadership into such a state of constant salivation that the partner is forever on the payroll.

I would like to say that it’s not necessarily the fault of the OEM’s middle management that actually signs up these deals, and delivers inferior programs to dealers, when they know nothing about how the real world works. Their job in the company is not to get fired! They are the best of the best in the company when it comes to surviving… don’t rock the boat, always stay frugal, and make sure your name is next on the job change list. The industry is always evolving, especially with regard to marketing and technology, and the job of an OEM middle manager is to stay on top of the changing times without going on a limb. Limbs can get cut, broken or burned; do too much and be progressive and you’ll get chopped; do too little and you’ll get burned by the dealers and that so called “partner” that’s been talking in front of you and behind your back to EVERYONE.

The OEM middle manager needs to have a specifically defined roll that highlights the accomplishments that he/she needs to complete in the given year.

Send out a massive RFP (request for proposal); maybe start a small pilot or two and chose the one that is going to CYA (cover your ass) the most. Now, CYA is tricky. You can’t go with necessarily the best-in-class program because that sets the bar too high for future check boxes; not to mention it also isn’t always the cheapest (have to stay frugal remember). You can’t go with the worst because it will backfire too heavily.

The solution? The partner!

It’s amazing that the partner has (miraculously) always had the program capable of solving all problems right underneath their hat!

“We can do that!” “We have something similar!” “Why use anyone else?” These are all typical statements over the third bottle of wine. This is the beginning of a new revenue rainbow with a pot of gold at the end coming their way and you, the middle manager, has once again CYA’d by checking that box.

Stop there and it’s a beautiful story, economics at its finest, but there is one glitch with this model: the middle manager just screwed over thousands of dealerships and is launching the subsequent sales prevention team to do the partner’s dirty work.

The partner program that is now being shoved down the throat of every general manager in the continental US has been designed to continue the fear trickledown effect. Wrap up the buzz words, scary bar charts, and big boy pants for the local OEM rep and it’s time to storm into the GM’s office to make the presentation.

“Our partner says there is a problem Mr. Dealer; it’s time for you to…”

The OEM rep has given the dealership only two real choices: 1) The GM tells them to get the fuck out; or 2) The GM quakes in his boots and eats it up hook, line and sinker. (I think you know which is the most likely outcome.)

The local rep leaves the dealership feeling great because he/she firmly believes they brought value to that dealer; but at the end of the day, the new product, service or program brought the dealer nothing. No knowledge, no real solution (outside of maybe a Band-Aid), and a fuzzy action plan. This begs the question: What was actually accomplished?

Nothing. No changes inside the dealership that will actually make an impact. By selecting an inferior program (the one that the partner conjured up when he saw dollar signs) and even less direct support, the value and impact that could actually have been made isn’t there.

The manufacturers compete each year to make sure their teams are delivering the highest quality of automobile to each and every consumer, but their real client, the dealer, is hindered by less than best-in-class programs forced upon them. The heart of the OEMs – to help dealers compete in the changing market – is in the right place, but the actions taken by those who don’t even understand what it is they’re solving for creates a continual conflict between the very dealer body they are there to support.

The idea of “consumer first” should be everyone’s end goal, and the highest priority of both OEM and dealer. But, the lack of best-in-class programs (or even working programs) focused towards this achievement at the OEM level is disheartening.

So in the long run the box is checked, the partner is fat and happy, and the dealer is still spinning their wheels chasing the next big thing. All is good in the Auto World.

“I don’t always drink bullshit, but when I do it’s still shit. Stay thirsty OEMs” – The Most Enlightened Man in the World

I am leaving this post with optimism – needed after I used a sarcastic play on a classic marketing catch line. An optimistic view around OEMs deciding to work with their dealers to bring solutions that will make a difference with the dealer culture, process and, ultimately, the consumer experience in order to sell cars (that was the goal of the check box in the first place, right?).

Dealers always want to be better, so OEMs need to stop forcing “Today’s Three-Week Old Meatloaf Special” program down the throats of their real partner, the dealer. OEMs have the resources to provide the best, and it’s time to discover those programs and pass that knowledge along to their dealers. Of course, it’s going to take middle management guts, practical/real-world knowledge, and an OEM culture change to provide it. Here’s to that happening in 2014…