How to Solve 99% of Customer Service Issues: Empower your Front Lines 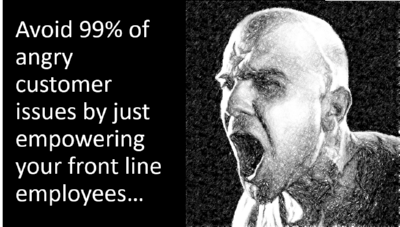 How to Solve 99% of Customer Service Issues: Empower your Front Lines

If you’re in the service business, there’s a simple way to solve nearly every customer issue that you’ll ever create: Empower your front lines.

Many of the issues, in fact, are created specifically because your front line is not (or does not feel) empowered to satisfy your customers. That is, by simply allowing these people the leeway to spend a few dollars or take a few extra steps to assist someone could save you thousands in lost revenues and profits.

Let me give you just two examples that happened yesterday; though both were handled differently.

The first incident didn’t even become a customer service issue precisely because the quick-thinking Southwest Airlines flight attendant was empowered to spend a few bucks to avoid such messes.

On my flight, a really big guy with a late connection couldn’t get food in the Denver airport before he boarded. I know he was a really big guy, because he got stuck in a middle seat next to me. He was clearly unhappy, and even uttered, “Southwest… never again” as he settled in.

When the flight attendant came by to go over the exit row instructions, he asked about any sandwiches for sale on board. He was not happy with her response that Southwest, unfortunately, didn’t offer food for sale. It was then that he uttered, “never again” … again.

The flight attendant could have left the situation alone, but chose instead to let him know there was no charge for his cocktail order. His mood changed immediately.

Later, when I stopped by the back of the plane to get another beverage for myself, she proactively asked about my seatmate, “Do you think the guy next to you would like another vodka soda?” Even with the proactive nature of Southwest attendants, this caught me off guard. In my mind, there was no need offer a second free drink, as he seemed satisfied with the airline.

Didn’t matter. She showed up at our row with a drink in hand and asked him if he’d like another. His decent mood turned almost giddy and joyful. A customer service issue was solved before it ever became one all because the flight attendant was empowered to take care of flyers.

About two hours after we landed, I found myself standing in the lobby of a Marriott property asking the front desk clerk for help with the Wi-Fi. It seemed my information (name and room number) was not in the system, so I could not login to the enhanced network offered to Marriott frequent travelers.

I assumed, wrongly, that she would hand me a slip of paper with an access code on it, and I would be on my way.

Nope. She put me on the phone with their Wi-Fi tech support where I spent twenty minutes dissecting their issue. Eventually, tech support got my iPhone connected to Wi-Fi; though this was already a bad experience that could’ve been avoided had the clerk just provided me with an access code.

Then, it got worse. Marriott’s tech support now expected me to go back to my room (I was on my way to dinner) to help them connect my laptop and iPad – again, likely taking 20 minutes for each device. I chose, instead, to seek help with Marriott’s Twitter support team.

It was clear from their limited responses (and hours of no response) that no one at Marriott International seemed to care. Five hours after my last request for help from @MarriottIntl, someone finally responded that if I would send them a direct message with my confirmation number, they would resolve the issue.

That was two hours after my last message to them. I was now asleep, as it was 11 PM.

To humor them, I did send a direct message with the information this morning.

Six more hours with no enhanced Wi-Fi for my laptop; and I checked out of the hotel. Then this exchange:

As of this writing, Marriott still doesn’t understand the issue, as they still want me to connect with the “hotel executive.” It’s not the hotel that provides the Wi-Fi or the hotel that failed to respond to my multiple requests for help; it’s Marriott. The hotel did all they were empowered to do to solve my issue.

I discovered (on my own) just before checkout, that there isn’t even a need for room number and last name when you order the basic, free Wi-Fi.

Imagine if the first or second or third person I dealt with said, “You do know the free Wi-Fi requires no login, right?” I would’ve immediately moved to that service for the sake of time and the (then) minor issue would’ve been resolved.

This issue, certainly, pales in comparison to life’s real problems. That said, it does speak to a company’s leadership. Front line employees treat your customers no better than they are treated; and, they will not go out of their way to solve problems when they feel underappreciated.

Southwest gets this. Marriott does not.

This past year, I divided my lodging “loyalty” between the property options of Marriot, Hilton, Holiday Inn and even AirBnB – there’s simply not enough tangible benefit to sticking with just one – and while I expect to experience issues, I also expect (as do most frequent travelers) to have those issues resolved in the most efficient (for the customer) way possible.

For next year, my choices will no longer include Marriott. Of course, I know they won’t miss my 25 or so nights per year, but if they’re unable to empower their front lines to solve simple issues (as Southwest has done), they will likely find themselves missing more than just me.

« The Car Dealer’s Step-by-Step Guide to Getting More At-Bats » Automotive Internet Sales Processes: The DISC Test and the DIR Test