Yes, I know this isn’t a tech blog; I get it. However, in order to be able to function normally again, I recently had to solve a nagging issue with my new Dell Inspiron 13-5378 laptop running Windows 10. My laptop began overheating and shutting down (coincidentally, just after a BIOS update); not a good thing when you use your laptop for business presentations, as I do.

The reason I’m posting the solution to this problem on my leadership and management blog is because I discovered it on my own. As far as I can tell, there are no other resources online showing this solution; so, thought I should share it with anyone else who’s tried virtually everything to get their new Dell laptop to stop shutting down on its own.

The laptop was relatively new – roughly three months old – and the fan (during the first three months of use) ran almost constantly. This was annoying, but not tragic, as the laptop performed well.

Then, I accepted a Dell Update about three weeks ago and everything changed.

The fan was no longer running as much as it was before. This was great until… the laptop shut down! I’ll save you the details about every step I followed in an attempt to fix this issue, and just give you some quick bullet points that did not work.

What Did NOT Fix My Dell Laptop’s Overheating Problem:

How I Solved My Dell Laptop’s Overheating Problem:

To verify this works for you, you may want to download the free HWMonitor from CPUID. This handy little program shows you lots of cool stuff – including the internal temperatures of various important components of your laptop. Here’s my current readout:

(Oh, and I currently have 7 tabs open in Chrome while also running PowerPoint, HWMonitor, iTunes, Word and Excel… all with 100% screen brightness!)

Okay, here are the steps I took to stop my Dell Inspiron laptop from overheating and shutting down:

Click the Windows Icon and type “edit power plan.” Click on the link provided and you should see this window appear: 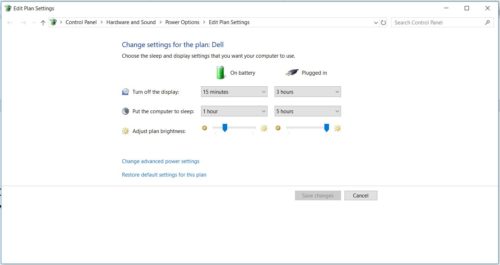 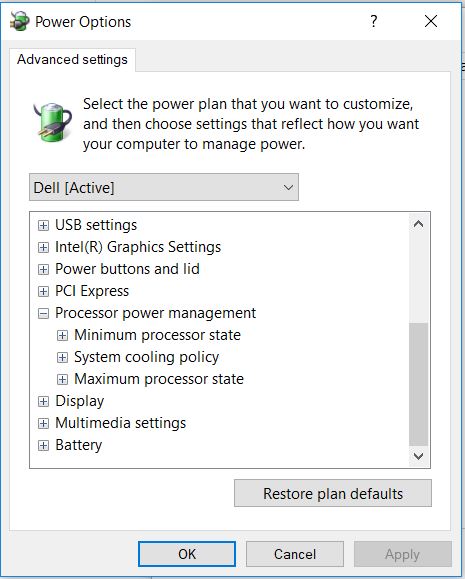 Open the “Processor power management” choice and select “Maximum processor state.” I changed both settings (“On battery” and “Plugged in”) to 85% (you can experiment with different settings), clicked “Apply” and then “Okay.” 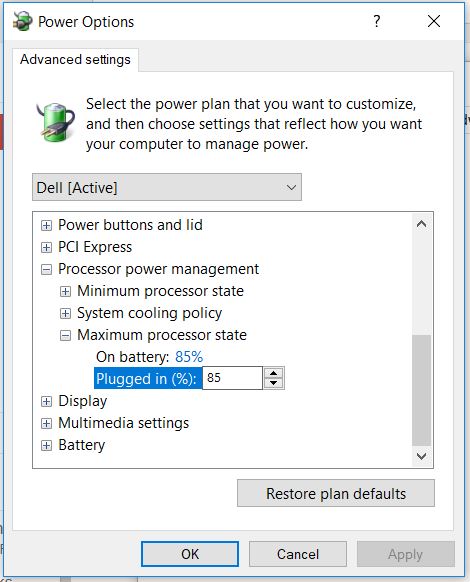 After a quick restart (not sure if I needed to or not), my laptop was running perfectly. It’s been a week and my Dell Inspiron has never once overheated or shut down on its own; and the fan rarely runs!

Oh, and I haven’t noticed any issues with speed – though I’m sure I caused something to run slower by lowering these settings from 100% to 85%; but, frankly, I’d prefer a laptop that never shuts down on its own to one that runs faster, but crashes constantly.

I am hopeful this solution works for you. If you discover a different solution for this problem, please let others know in the comments below.

« How to Set More Sales Appointments that Show and Buy » Eight-Car Alan & Thirty-Car Theo: What Separates Top Sellers from the Rest