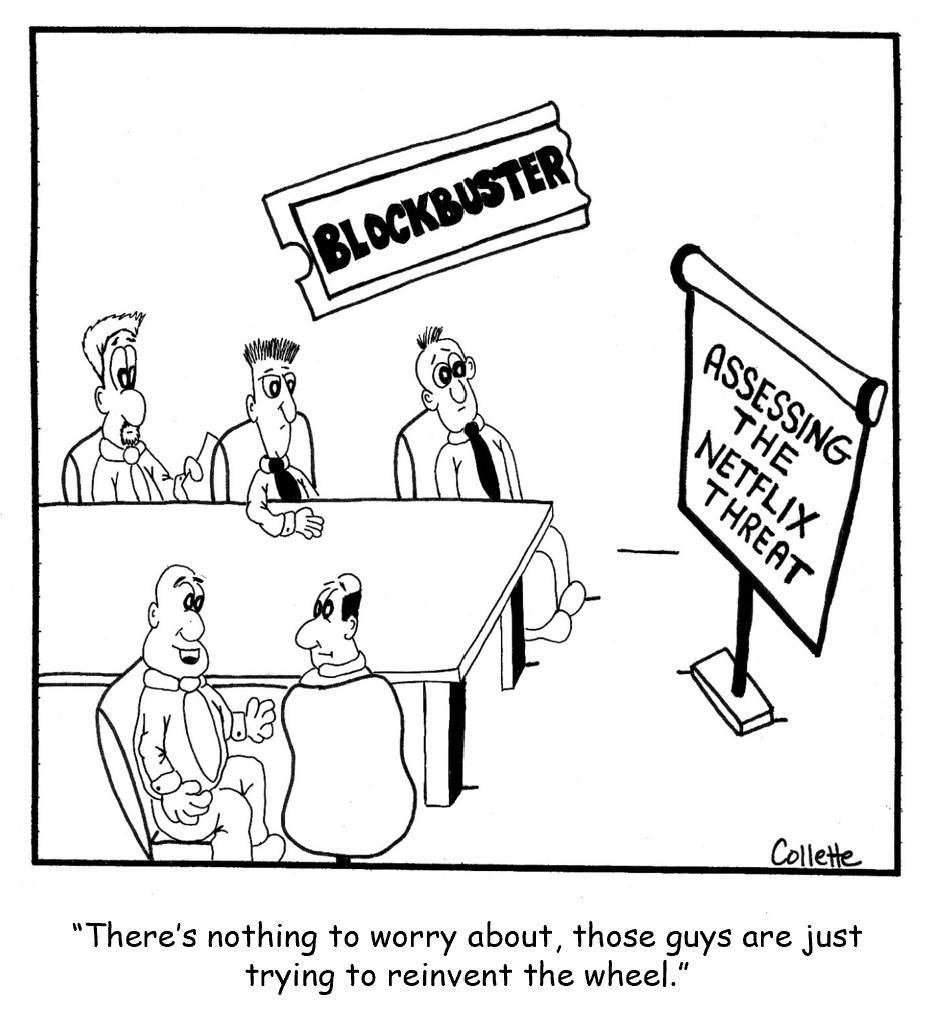 (This is an excerpt from The 30,000-Pound Gorilla in the Room – Available on Amazon.)

While those in the workplace who waste effort trying to create something that’s already been created can be annoying, they’re not nearly as annoying as those who constantly chastise everyone with “We don’t need to reinvent the wheel here.”

No, we suppose we don’t. Moreover, we’ll argue we don’t need to keep saying reinvent the wheel to cover virtually any improvement effort at work with which you disagree.

Of course, since you’ve made it your go-to catchphrase, you’ve accused others of trying to reinvent the wheel when they’re merely attempting to advance some process in need of an upgrade.

Continuous process improvement is a real thing for successful companies.

Of course, normal people understand no one is reinventing any wheels; they’re just continuing to improve so they can continue to grow market share or profits or both. If only there were no annoying managers in their way.

Replacement phrases: No replacement needed; embrace change and just stop saying this one.

See also: If It Ain’t Broke Don’t Fix It

See this and 211 other annoying business phrases (complete with cartoons) in what’s being called “The Ultimate Workplace Survival Guide” – The 30,000-Pound Gorilla in the Room. Available on Amazon.

Want to see the complete list of all 212 Annoying Business Phrases before you buy the book? You’re in luck:

24/7 and 24/7/365 – 30,000-Foot View – 800-Pound Gorilla – 80/20 Rule – Action Item – Agree to Disagree – All Hands on Deck – Analysis Paralysis – Are Two Different Things – ASAP – Ask, The – At the End of the Day – At This Juncture/At This Point in Time – Baby is Ugly – Back to Square One – Back to the Drawing Board – Ballpark – Bandwidth – Bean Counter – Beat a Dead Horse – Been There, Done That – Behind the Eight Ball – Best Thing Since Sliced Bread – Between a Rock and a Hard Place – Bio Break – Blocking and Tackling – Boots on the Ground – Bottleneck – Bottom Line – Bring Your ‘A’ Game – Bubble it Up – Bullet-Point Me Something – Burn the Boats – Buy-In – Cascade – Change Agent – Chasing Shiny Objects – Circle Back – Circular Firing Squad – Client Engagement – Come to Jesus Meeting – Coming Down the Pike (Pipe?) – Connect With – Could Care Less – Crawl, Walk, Run – Cross the T’s and Dot the I’s – Crushing It – Currently Now – Cut the Mustard – Dead in the Water – Deliverables – Devil is in the Detail – Direct the Traffic – Disruptor – Do a Deep Dive – Dog in this Fight – Double-Edged Sword – Download – Drill Down – Drink from a Firehose – Drink/Drank the Kool-Aid – Drop-Dead Date – Drop the Ball – Ducks in a Row – Easier Said than Done – Eat Your Own Dog Food – Elephant in the Room – Face Time – Firewalled – Full-Court Press – FYI – Game Changer – Game Plan – Game Time – Get into Bed – Give 110% – Give You a Heads Up – Go Forward Basis – Go-Getter – Go Slow to Go Fast – Goes Without Saying – Good with a Hammer – Grind – Guru – Hack – Hail Mary – Hammer it Out – Hard Stop – Haters Gonna Hate – Headhunter – Heavy Lifting – Herding Cats – Hit the Ground Running – Hit the Nail on the Head – Holding Hands – How the Sausage is Made – Hustle – If It Ain’t Broke Don’t Fix It – Impact – Incremental Improvement – It Is What It Is – It’s a Cart and Horse Situation – It’s All in the Details – It’s all Semantics – It’s not Rocket Science/It’s not Brain Surgery – Jack of All Trades, Master of None – Juice is not/is Worth the Squeeze – Jumped the Shark – Keep me Looped-In – Land the Plane – Let Me Start by Saying – Level Set – Light a Fire Under – Line in the Sand – Literally – Lost in the Sauce – Low-Hanging Fruit – Make the Cut – Minefields – Mission Critical – Move the Goalposts – Move the Needle – My Two Cents – Net-Net – Next Level – No Problem – Not my First Rodeo – Nothing Burger – Of the World, The (Blanks) – On Our Radar – On the Same Page – One-Trick Pony – Open a Dialogue – Operationalize – Optics – Out-of-Pocket – Over the Line – Ownership – Par for the Course – Paradigm Shift – Pass Muster – Pass the Buck – Pee in your Pool – Piece, The (Blank) – Pick Up the Ball and Run with It – Ping – Play Ball – Play Hardball – Playing Phone Tag – Point Person – Postmortem – Price Point – Pull Yourself Up By Your Bootstraps – Push the Envelope – Put a Pin in It – Put it on the Back Burner – Putting Out Fires – Raise the Bar – Reaching Out – Reinvent the Wheel – Riding Shotgun – Rightsizing – Rising Tide Lifts all Boats – Run Interference – Run it up the Flagpole – Screw the Pooch – Seamless Integration – Shit Hits the Fan – Shit the Bed – Shit Where You Eat – Show the Seams – Silos – Skin in the Game – Smell Test – So – Solutions Provider – Soup to Nuts – Space – Spinning the Plates – Stake in the Ground – Stay in Your Lane – Sync – Synergistically – Take it Offline – Take it Up/Down a Notch – Team Player – Tear Down, The – Tee it Up – That Said – There’s a First Time for Everything – There is No “I” in Team – Think Outside the Box – Thought Leader – Total-Total – Touch Base – Transition Phase – Triage – Troops – Trying to Boil the Ocean – Under the Bus – Unpack – Up to Speed – Utilize/Utilization – Warts and All – Waterfall – What Keeps You Up at Night – Wheelhouse – Where the Rubber Meets the Road – Win-Win Scenario – Work Smarter, Not Harder – Wrap Your Head Around – You Don’t Know What You Don’t Know.