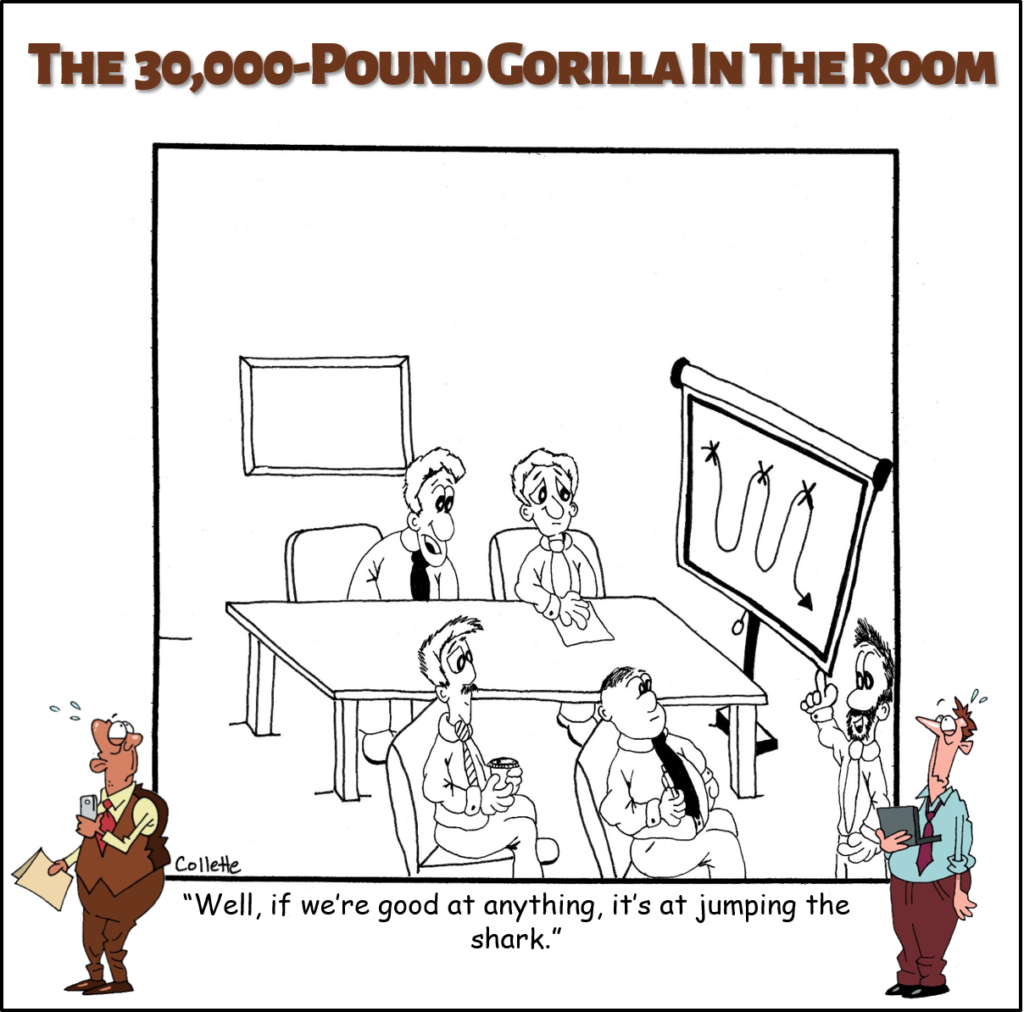 (Jumped the Shark is an annoying business term and is just one of the 212 Most Annoying Business Phrases Managers Effuse, Confuse, and Overuse detailed in the hilarious must-have guide for every workplace: The 30,000-Pound Gorilla in the Room. Available right now on Amazon.)

Part of the annoyance factor on this one is created because most users of jumped the shark have no idea of its origins. They’ll tell you something is past its prime, no longer relevant, gone too far, or on a downslide by explaining how it’s jumped the shark.

They’re pretty sure they’re using the phrase correctly, but if quizzed, they’d have no idea the original shark jumper was The Fonz. To someone who was alive in the 1970s (like Steve), this is very annoying.

Moreover, many will assume incorrectly that jumped the shark is more about the downslide than the act that caused or marked the beginning of the downslide. They’re wrong.

The act of jumping a shark – which Fonzie did early in the fifth season of Happy Days – is often the cause of the downslide and always marks the moment when the downslide began.

Petty difference, we know; but you should know by now we can be petty when it comes to business language (and classic television, apparently).

Once Fonzie jumped the shark there was no saving the show. It was destined to die a slow death (which it did over the next six seasons). Referring to the act of shark jumping (and not the subsequent demise) is the only proper way to use this term.

In other words, if you can’t pinpoint the act that caused something’s downturn, it cannot be a jumped the shark moment or situation. It’s merely an old-fashioned, boring business downturn.

If you believe our strict definition of jumped the shark makes its usage incorrect in all but the most improbable of situations, then you read it right. In business, almost no one ever jumped the shark… yet, try telling that to the annoying manager who can’t stop saying it.

Replacement phrases: Gone too far; On a downturn; No longer relevant

« Juice is not/is Worth the Squeeze » Keep Me Looped In