I had a fun exchange with Walmart on Twitter last month that I believe deserves sharing here – especially given that the exchange can (I’m hopeful) remind corporations to separate my duties as a customer and their duties as an employer when it comes to training their managers.

I was in Tallahassee, Florida (yes, on purpose) when I found myself in need of both foodstuffs and household goods. Of course, the answer to where one can find anything and everything? Walmart!

During this quick trip to Walmart, I passed the electronics department where a well-groomed man with a logoed shirt stepped out and asked “Have you heard about our special deals?”

Because I am known to never pass up a “special deal” I was more than a little intrigued. “No,” I replied, “I have not” (in a “tell me more” tone).

It was then that I noticed the logo on his shirt matched the logo on a draped table behind him, revealing that he did not work for Walmart, but rather for a satellite TV provider.

Believe it or not, I don’t choose Walmart to be subjected to overly-aggressive, hard-sell tactics. In fact, the best visits I’ve ever had at Walmart involved almost no interaction with their employees; just as my best visits to an online store involve little to no human interaction. (No offense, this just means I found everything I needed without having to ask for help.)

“Um, no thanks, I don’t live here,” I offered in a lame attempt to halt this unwelcomed intrusion.

“Well, do you have television where you live?” The now-smarmy satellite salesman countered.

“We do, and I’ve got Time Warner Cable and I absolutely love them… so, no thanks.”

I could not believe the words that had just come out of my mouth. While I don’t hate Time Warner Cable, there is no way my feelings for them could be called love. This guy not only made me uncomfortable about my Walmart visit; his aggressive behavior elicited a lie from me. (Something I reserve for questions like “Do you know how fast you were going?”)

Beginning to forget why I was in Walmart, I pushed my cart a little faster in the straightest line away from this guy. After I was safely away, I remembered why I had come to Walmart, found and purchased my items, left the store and then sent the following Tweet:

While I expected this would elicit a response from Walmart, I never expected their reply would include a request to train their managers for them. Here is the entire exchange that followed: 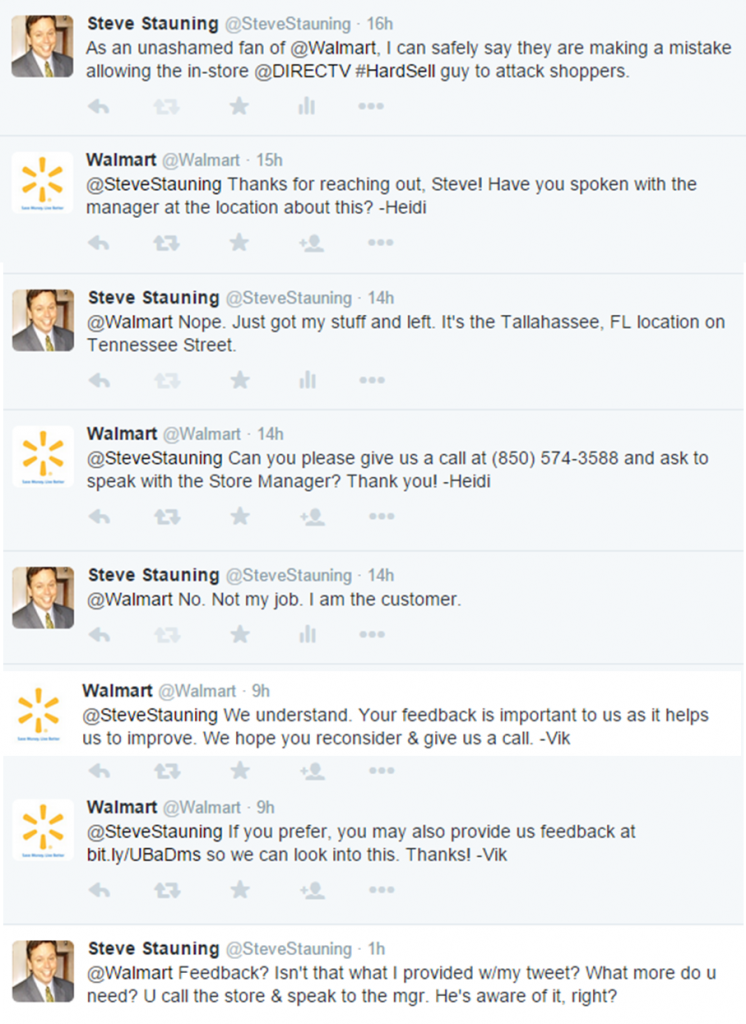 Did they think the manager had no idea a satellite television provider had set up a draped table in his or her electronics department and was trying to hard sell shoppers without any kind of permission? What could I possibly tell their manager that he or she didn’t already know?

Somehow, the Twitter Team at Walmart is under the impression that customers should train the store managers on how to treat the shopping public.

Sorry. Not our job.