Dear Car Dealer: Why your record year might be a bad thing

Yippee! Now, get the slings, because you’ve likely broken your arm patting yourself on the back.

Newsflash: The entire industry had a record year. 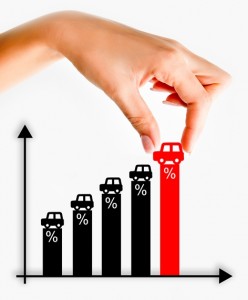 More than 4,000 fewer stores makes 2015 a record year even for the most poorly run dealerships in the country. Break out the champagne.

Yeah… but how could a record year be bad for my dealership?

The problem is that relatively few dealerships actually grew market share in 2015. Most – yours included if you’re not considered among the best run stores in the business – lost market share. The bigger problem is those dealers who lost share while having a record year are oblivious to the dangers that lie ahead.

The market will flatten (or worse) at some point (AutoNation’s Jackson is predicting the flattening this year). When the market does start to cool, I’m hopeful you heeded the advice we shared in February 2015 when we published The 5 Things Dealers Can Do To Stay On Top During the Next Downturn. Although, based on recent reports I’m getting from dealers, the answer is probably a “no” for most of you. Let’s look at some quick evidence of this from two large groups:

In my opinion, the volume chasing at AN and the cost slashing at the other big group are basic reactionary panic moves. We’ve seen this movie before: sales momentum slows, inventories creep up, discounting grows and legitimate marketing sources are sacrificed.

If you don’t know how you got to the top, you have no idea how to stay there.

In automotive retail, this means if you lack solid, disciplined, repeatable processes that create a “wow” experience for your customer AND your employees, you were just uncontrollably riding the wave in 2015. When that wave ride ends – if it hasn’t already – you and your team will be scrambling just like the teams at the big groups making reactionary panic moves.

The layoffs, discounting and cost-cutting an undisciplined company is forced to make in reaction to a slowing market may cushion the short-term landing, but they pretty much guarantee these companies will be down much longer than necessary as they lose even more market share.

You see, poorly-managed companies make reactionary panic moves because they lack solid, disciplined, repeatable processes founded on strong long-term growth strategies. Great companies, by comparison, create and manage successful processes across all business units – and because these processes are solid, disciplined, repeatable and focused on the long term, they can stick to them regardless of which way the market winds are blowing.

Neither AN nor the other group lack great leaders; they just have what I call a “soft middle.” In simpler terms, someone (or, more likely, a bunch of someones) between the visionary CEO and the front-line employees is sabotaging the plan. (Why they do this would fill a few books, so we won’t explore that here.) The soft middle is not executing the strategy and (for whatever reason) no one is holding them accountable.

But… it’s all about sales, dammit!

When you live for “this month,” as most dealers still do, you are prone to bouts of reactionary panic when the market winds shift. As your loss of market share starts to sting a bit more, you and your managers (like those with the big groups) may start to blame “the soft market,” “interest rates” or “inventory” as the reason you’re struggling.

In reality, you’re struggling because someone already stole your market share. They’ll be the ones servicing those vehicles and they’ll be the ones selling these customers their next cars. The dealers who stole your market share in 2015 won’t be looking for external sources to blame. They’ll just keep fine-tuning their long-term strategy and continuously improving their processes as the market winds shift.

I personally know dealers who took gross profit hits in the fourth quarter (like AutoNation did) and others who’ve slashed their digital budget recently (as the other group did). The common denominators of these two types of dealerships I’m personally familiar with? Their managers fly by the seat of their pants; their managers are the epitome of the soft middle; their managers don’t believe processes sell cars.