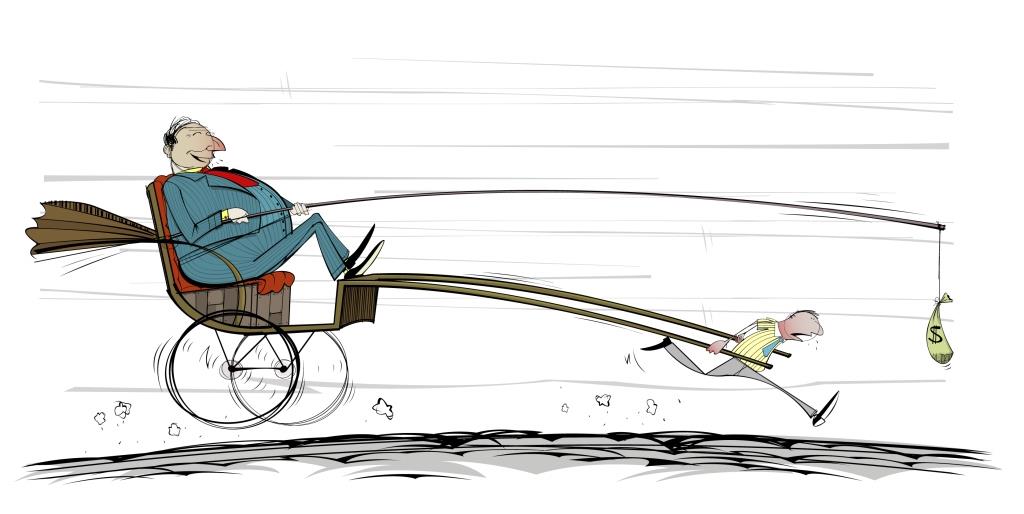 Have you noticed what I’ve noticed about the American workforce over the years? I’ve worked closely with literally hundreds of people since leaving the Marine Corps in 1985, and an overwhelming majority of my coworkers simply hated their jobs. It’s not that any one of them had a particularly lousy job, per se; it’s just that whatever it was they were doing, they were keenly able to find the clouds in every silver lining.

Why is it that so many people seem so unhappy doing what they do? Has it always been like this? Like most everyone reading this post, I’ve held at least a couple of jobs I didn’t like; but if I ever found myself truly hating what I was I doing, I either moved on or changed the office dynamics for the better.

What’s everyone complaining about?

To pay for college, among other jobs like selling cars, I drove a taxi and that sucked; and I even sold manure for a landscape supply company and the guys that literally had to bag that stuff had every reason to hate what they did. Interestingly, however, my fellow taxi drivers and the poor guys bagging manure all day rarely, if ever, complained. They all just seemed happy to have a job.

Of course, these guys were all immigrants; and driving a cab or bagging manure in America was an improvement over the alternatives in their collective homelands.

This is not a slight, but many American workers are top notch at complaining. It seems no one can complain like an American with a job. Surprisingly (to me, anyway), is how many working Americans not only hate their jobs, but actually begrudge the very people who built the company that is providing them with this “awful” employment. They complain about the “Good Ol’ Boys’ Network.”

Called The GOBN (pronounced gob·in) for short, the Good Ol’s Boy’s Network is an illuminati-like group of successful businessmen who do everything they can to keep their club exclusive by keeping you down and out.

The GOBN is the workplace equivalent of the Boogeyman; and they will do anything to keep you from succeeding. I know this because, you see, I am part of the GOBN. I gained entry into the club by virtue of my business success. It was an interesting initiation that I’m not supposed to talk about, but I will share as much as I think I can without being assassinated by the GOBN Security Forces.

One day, the doorbell rang and a group of gentlemen in tailored suits were standing on my stoop. They were all very stoic behind their dark sunglasses.

“Mr. Stauning?” The tallest one asked.

“We need you to come with us, Mr. Stauning.” He replied. (Yes, this was all very Matrix-like.)

Instinctively, I knew immediately that this was the beginning of my GOBN initiation. You see, when you’ve reached my level of success, you just know when the GOBN are inviting you to join. Smiling, I followed these men to their waiting limousine, where I was blindfolded and taken to a secret location.

While I am bound by a sworn oath not to disclose the specifics of GOBN initiation, I can tell you that yes, we do have a secret handshake. Additionally, we use code words to alert other GOBN to our presence so that we can enjoy our GOBN privileges even when we’re away from our home base. Finally, we spend about 90% of our time working to keep you down; the other 10% is spent deciding where to have lunch.

As a full-fledged member of the GOBN, my only goal now is to keep you from joining.

It’s always cracked me up when anyone complains about the Good Ol’ Boys’ Network (in general), or (more specifically) about their own company’s founders, heirs and current leadership team. Employees are so misunderstood… just ask them. The GOBN don’t know anything about what’s “really” happening on the front lines… again, just ask the employees.

If you’ve ever found yourself lamenting about the GOBN – about how they’re holding you or your company back – it’s time for you find the nearest mirror to meet the real Boogeyman.

Are you one of those who believe that most of the managers you’ve ever worked for have some sort of vendetta against you? That you’re somehow the target of their unjust harassment and scorn?

Guess what? It’s not them, it’s you. You are the problem.

Is it possible or even probable that you’ve had bosses with chips on their shoulders? Absolutely. In fact, I would be surprised if you’re over 30 and had never worked for a boss like that. Of course, I can tell you that 99.9% of those jerks still want to get the job done more than they want to fire you. If you help them reach their goals – and you do this without being a problem or making their jobs any harder – they will leave you alone. In fact, some of them might actually promote you. What they won’t do is fire you unjustly. Why would they want to?

Employers want production; thus, the opposite is generally bad…

Every time a manager fires someone or forces an employee to quit, they make their own job that much harder. At the very least they have to find and train a replacement. Moreover, firing someone often requires paperwork, the payment of unemployment compensation and the potential for lawsuits. None of these are attractive outcomes for even the most sinister of bosses; and all of these require more work – something the average manager wants to avoid.

If you’re the guy complaining that your boss is trying to fire you or won’t give you the good shifts/days off/hours because she just doesn’t like you; there’s at least a 90% chance that you’re delusional. Even the worst bosses I worked for appreciated those who truly worked heard; those who truly tried.

Ultimately, you leave your employer no choice but to fire you if you cannot change unproductive behavior. It’s weird, but bosses actually want employees who produce; without any drama.

Every bad employee I’ve ever met had some sad story about how this employer or that employer had a vendetta against him or her. In fact, it takes precious few seconds to determine that the employee in question was not only unproductive, but probably destructive as well. Crazy, you say, that an employer would fire someone like that. Of course, every one of them saw the employer as the bad guy – and none of them ever accepted any personal responsibility.

There is no secret handshake…

By the way, there is almost never a deeper meaning to anything. There are almost never conspiracies and the simplest answer is almost always correct. The GOBN is not conspiring against you. They don’t have a secret handshake. In fact, most of them don’t even like each other. (I can totally vouch for that.)

The key to real success is to join the GOBN, not to try to blast through it. This takes networking. Networking  is simply meeting everyone you can without being a nuisance; and getting these people to see you as a resource and especially a friendly, intelligent ally. This takes three steps:

Beyond just networking, of course, you really need to be providing some “value” to the GOBN. You see, the GOBN (like you) want something; and if you can help them get it (i.e. provide value) then you will be valued by the GOBN.

Of course, there really isn’t an organized Good Ol’ Boys’ Network that’s conspiring against anyone. Just a bunch of managers, executives and business owners who want to reach their goals. Interestingly, nearly all of them fully understand that they need people like you to help them achieve these.

Moreover, no one is out to get you; no one is trying to hold you back. Amazingly, these perceived enemies of yours just want you to do your job. Don’t believe me? Try leaving the drama at home, arriving to your job on time with a smile and ready to work for about a month. If you don’t get promoted by the end of those 30 days, then try it again for another 30 days.

In fact, try it for the rest of your life; you’ll be amazed how the GOBN love someone who does their job.