Will McGinnis from vAuto posted the picture above on LinkedIn this week showing an unidentified Colorado Ford dealership with six salespeople sitting out front waiting on the Up Bus… in the middle of the day… on a Monday!

Maybe the best part about the photograph was that the dealership actually has bus benches installed for as many as nine salespeople to sit on while they wait for the Up Bus… in the middle of the day… on a Monday!

My guess – and it’s just a guess – some of these salespeople didn’t catch an Up for a couple of hours; if at all.

What’s not a guess – more of a prediction – is that none of these salespeople is going to sell 30 units this month. (That’s a sure thing!) 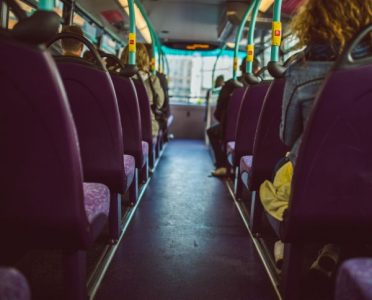 Maybe the second-best part about the photograph was that this was the 27tt of the month! Where is the urgency in this dealership? Dear God, don’t they have any Be-Backs from the weekend to call? Don’t they have any orphan owners in their database to call? Aren’t there any leads they could be responding to?

Are there any salespeople at this dealership that want to be successful? Perhaps just a few who want to sell 30+ cars this month and every month?

The Secret to Selling 30 Cars a Month

What’s funny about the secret to selling 30 or more vehicles each month is that there is no secret. It takes focus. It takes activities. It takes work.

Given that the Up Bus arrives less often and with fewer people on board than it did even a few years ago, salespeople have a choice: They can sit outside on their butts like these six were doing (… in the middle of the day… on a Monday!) or they can learn to drive their own Up Bus.

I recommend you choose the latter.

A formula that’s been true for years in automotive retail goes like this: Make 1,000 quality calls, sell 30 cars. Phone calls, you see, are activities that drive success when in comes to selling cars. Whether these phone calls are to your internet leads or your sold database is irrelevant. Make 1,000 of them this month and you’ll sell 30 cars.

The pushback I receive – that you don’t have 1,000 people to talk to or that you don’t have time to make 1,000 calls in a month – is silly. First, I’m referring to calling about 250 people each month, leaving 800+ quality voicemails and ultimately speaking to fewer than 200 of them.

Where will you get the 250 people to call? Ask your sales manager for 250 orphan owners who bought their last vehicle at least 36 months ago. It’s called owner marketing, and when done right, you should be able to sell 30+ without ever taking a Traditional Up again.

As far as the time goes, if you’ll make just 50 quality calls each day, you’ll hit your 1,000 in just 20 days! Given that you’re going to leave 800 voicemails, the 50 calls you make each day (including adding good notes in the CRM) should take you no more than 2 hours. Since you’re sitting outside with five fellow salespeople (… in the middle of the day… on a Monday!), I’d say you have more than 2 hours each day to make quality phone calls.

There you go; now start making your calls! 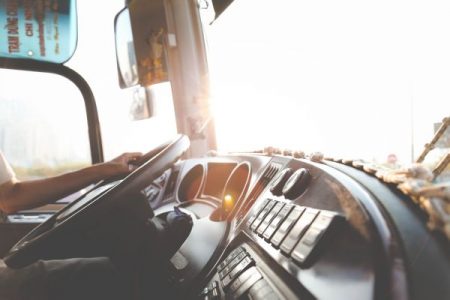 If you’re afraid of the phones, then you probably shouldn’t be in sales. That said, there are other ways to drive your own Up Bus. Old-fashioned networking is just one of the many ways 30+ sellers do this today.

Old-fashioned networking starts by making sure you always have your business cards on you. Then, every time you meet someone (whether it’s at Burger King, at home, at a civic event, or even in a bar), you pull out a business card and you say these three things:

Of course, if any of these three statements is incorrect, then you’re in the wrong business!

Now, if you or the dealership offers a bird dog fee, be sure to highlight that in your conversation with a simple line like, “I know you’re probably not in the market right now, but if you’ll give my card to any friends or family member who might be in the market for a new vehicle – and if they buy from me – I’ll give you $200 just for sending them my way. Of course, you know I’ll treat them right because, after all, I’m your friend in the car business.”

Did you know there are vehicle salespeople out there today who generate 80% or more of their sales from people they’ve connected with on Facebook? There are!

Plus, and this is the great part about any kind of networking (whether old-fashioned or social), the people you sell who come from networking activities pay you a premium! They also close at up to four times the rate of a Traditional Up and in less than half the time!

Do you think you could hit 30 next month if you closed Ups at 4x the rate you are now and in half the time? I know you could! Plus, social selling is a lot more fun than waiting on the Up Bus… in the middle of the day… on a Monday!

As witnessed by the six salespeople waiting on the Up Bus (… in the middle of the day… on a Monday!), most sales managers are not going to require you make 1,000 calls a month or that you conduct old-fashioned networking or that you occupy your time in the dealership practicing good social selling.

No, most sales managers are just happy to see you out front, on point, ready to sell.

Does it matter that there are no Ups to sell?

Selling 30 or more vehicles a month is a personal choice. It means choosing to drive your own Up Bus. It’s not hard, it just takes work. 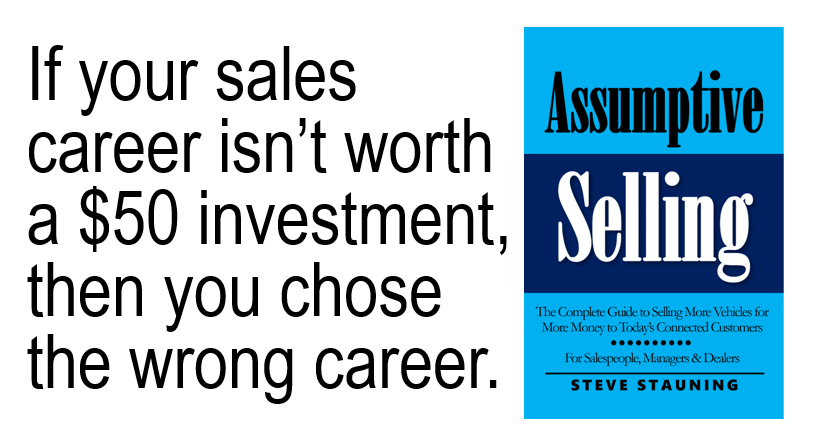 « Should You Buy a Car with a Rebuilt or Salvage Title? » Training Your Sales Team: The Dirty Little Secret to Great Training