Win or Lose; Everyone Eats a Shit Sandwich 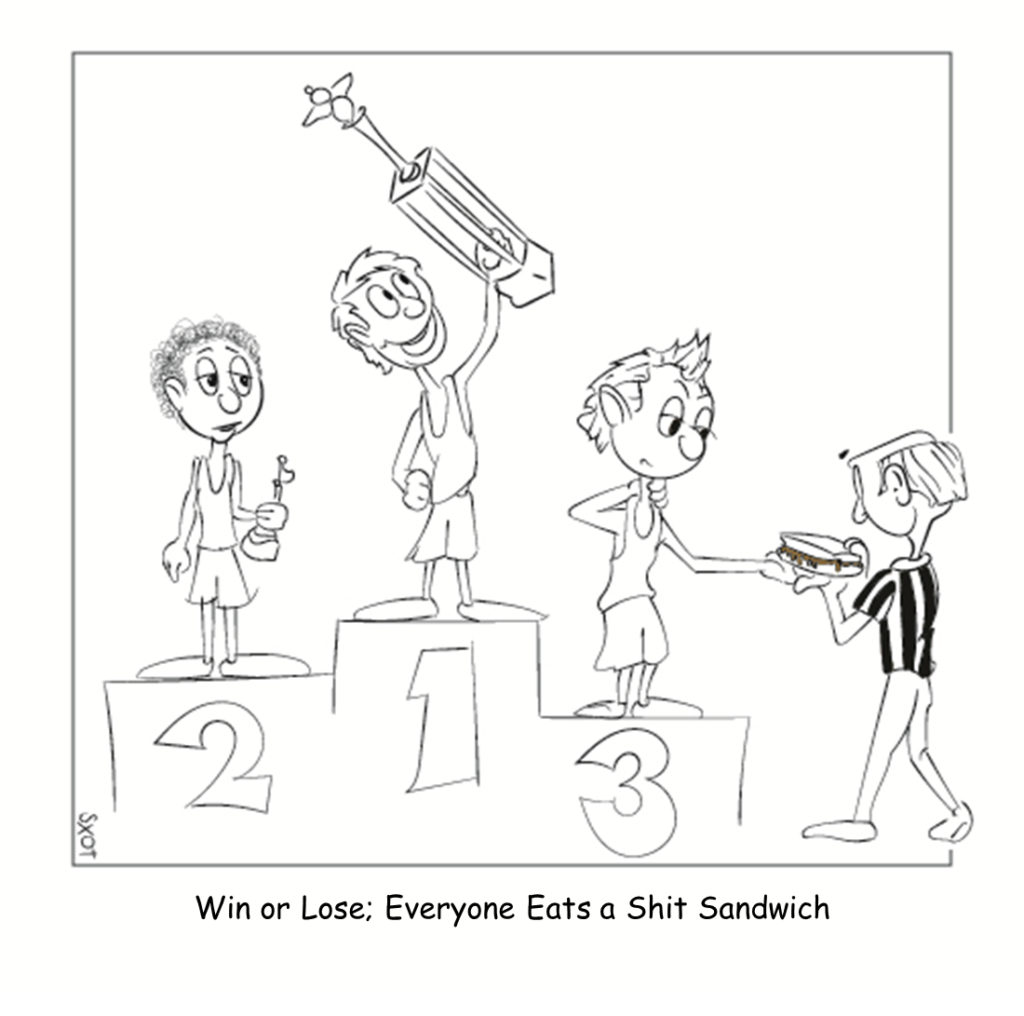 Win or Lose; Everyone Eats a Shit Sandwich

In what must be some odd (and successful in reaching its dubious goals) experiment intended to create ultra-fragile adults, America has been keeping its precious children from feeling even the slightest amount of disappointment for nearly 40 years. To oversimplify what has happened: the rules for children’s recreational sports in the US have morphed from “you win some; you lose some” to “everybody gets a trophy and no child ever has to eat a shit sandwich.”

And, as you’ll learn a few more times in this book, there is a universal law at play here that is as immutable as the Law of Gravity: the Law of Unintended Consequences.

Unlike when I played Little League Baseball or Pop Warner Football, virtually every sports league in which my millennial sons played, the organizers distributed the same trophies to the winners as they did the losers.

And it was good.

Recreational sports, by definition, are meant to be recreational… and fun. Yes, I agree with those running these leagues that they should be fun. At some point, unfortunately, many of the recreational leagues have decided that you cannot have fun if we keep score, or if (God forbid) we crown a true champion.

Learning how to lose is a valuable life lesson of which we are depriving our children. Our children need to lose. They need to feel the sting of second place or third place or tenth place. Moreover, they need to feel this sting early and often. This is the first shit sandwich we should serve them in order to teach them how to accept and learn from defeat.

Though it’s likely that I participated in many hundreds of organized and ad hoc recreational sporting events in my youth, I cannot recall a single loss or losing season. This does not mean I was never on a losing team – I was certainly on plenty of them – it means that the pain of those losses has long since subsided; and there are no emotional scars remaining.

Teach your kids how to lose; how to be disappointed as early and as often as possible when they’re young; so that when they grow up, they actually grow up.